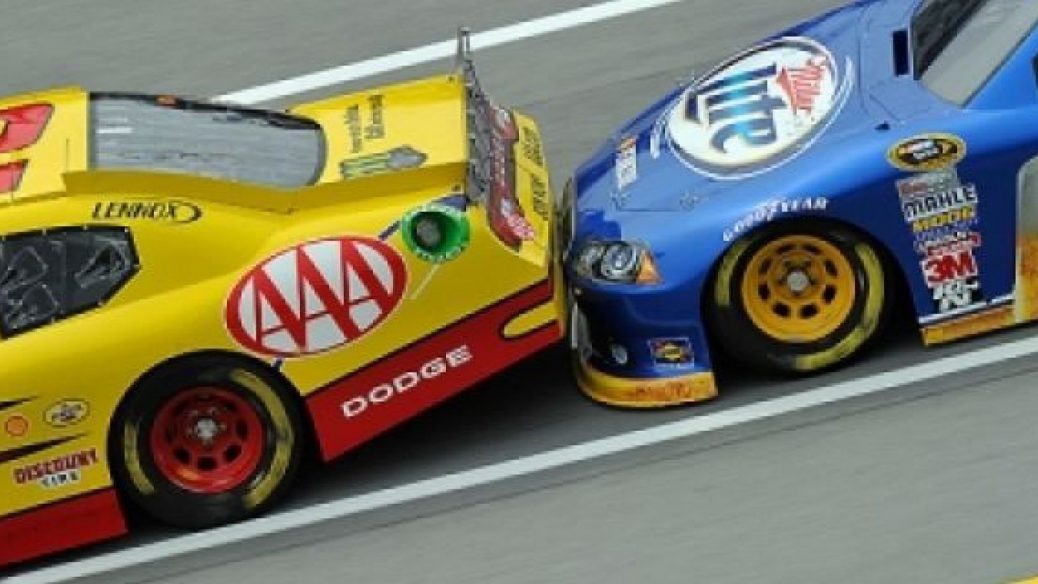 It’s early February. Speedweeks are upon us, and the Motorsports community is gearing up for the marquee event on the NASCAR calendar. Heralded as The Great American Race, the Daytona 500 is world famous as a frightening 200 MPH chess match of drafting, tactics and bumping. Drivers look to work together and gain advantages through conventional drafting techniques; sometimes, this leads to the unorthodox art of bump drafting, where one driver will look to capitalise on the momentum gained in the draft by physically pushing the car in front of them. Predictably, this is a high risk tactic. I thought it would be interesting with the 2020 edition of the race approaching to use simulation to take a closer look at what happens when one car bumps the car in front at speed, using models, road and experiments found in the VeSyMA – Suspensions and VeSyMA – Motorsports libraries.

What is bump drafting, and why does it happen?

Ever since Junior Johnson discovered the draft (also known as the slipstream) to win the 1960 Daytona 500 in an un-fancied car, NASCAR drivers have utilised the drafts created by their competitors to gain a speed advantage. As the vehicle in front punches a hole in the air, the resistance (drag) of the trailing car, when in close enough proximity, is reduced. Therefore, the trailing car gets in effect a speed boost. In 1988, spurned on by escalating speeds causing some extremely dangerous airborne crashes, NASCAR mandated the restrictor plate at Daytona and Talladega.

Essentially a rudimentary air restrictor, the “plate” as it is commonly referred to, limits the engine’s ability to breathe, cutting horsepower and limiting vehicle speed very effectively. So effectively in fact, when running alone at Daytona and Talladega, cars begin to approach their terminal velocity; when drag force acting on the vehicle equals the force supplied by the engine. By virtue of being close to terminal velocity, two cars close together can be faster than one car alone. Without getting too in depth into the aerodynamics at play, the leading car, by virtue of the trailing car being close, also receives a minor drag reduction in addition to the bigger drag reduction of the trailing car. A combination of the plate and this secondary draft effect (the primary being the trailing car’s speed boost) leads to the tight packs of cars seen in the Daytona 500 and other plate races.

Naturally, drivers will always look for an edge over opposition. It wasn’t long before the bump draft technique was figured out. As the name implies, the trailing car physically bumps into the car in front. By imparting some of the momentum increase provided by the draft from the trailing car to the lead car, the lead car’s velocity is increased. Similar to two pool balls colliding, this however is an elastic collision due to the two vehicles not being perfectly rigid. At 200 MPH, this manoeuvre requires a great deal of skill, and even more in the way of trust, as the consequences of a mistimed or placed bump draft are predictably violent.

The first thing on the to-do list was to create an experiment containing two vehicles. In the VeSyMA – Suspensions library, the experiment Suspensions.Experiments.PathFollowing.HighSpeedBankedOval looked to be a suitable place to start. I therefore duplicated this class, redeclaring the vehicle to the NASCAR example model found in the VeSyMA – Motorsports library. However, the default road model in this experiment features the vehicle going clockwise around the banked oval, whereas NASCAR tracks run counter-clockwise. Thankfully, the VeSyMA – Suspensions library features the Suspensions.Roads.RoadBuildingFunctions.BankedOvalCircuit road building function; using the default values and un-checking the boolean variable clockwise, I created a counter clockwise NASCAR-style high banked oval. Banking was set at 31 degrees (60% gradient) to mimic that of Daytona. The function creates an ideal oval circuit, so the road model generated is not entirely representative of Daytona (there’s no tri-oval) but it would be more than suitable for bump drafting my purposes. Road width was set at 15m (49.2 ft), with target speed set to 500m/s, enabling the driver model to run at wide open throttle.

To put the second vehicle in the experiment was a very simple process; I simply copied and pasted the vehicle and the driver in the same test, setting the chase vehicle to initialise 5m behind the lead. Reducing the trailing vehicle body’s drag coefficient to 0.3275 from 0.35 would simulate a rudimentary drafting effect, with the chase vehicle “catching” the lead half way along the back straight.

Without any alteration, both vehicles would traverse the circuit without interaction, as there is no contact models on the bodies by default. Re-positioning the hitch frames built into the vehicle template to the front and the rear of the body visualiser could be re-purposed as contact (bumper) frames. These frames were then connected to the contact model itself; simple contact was simulated by determining the relative x world position of the two frames driving two multibody force actuators via gains. To keep things simple, force was only actuated in the x direction of each frame, therefore the action of the nose/bumper deformation was ignored, as was any lifting of the lead car due to the trailing car’s nose submarining underneath the bumper bar. A limiter was deployed to provide zero force if the bumper frames were a negative (not in contact) relative distance apart. When the front of the chasing vehicle was co-incident in the x direction with the lead vehicle, then a force action and reaction occurred.

Simulating the experiment with and without the contact model, we can see the difference in velocity caused by the bumping action. It’s important to note that the only thing changing the lead vehicle’s velocity was the bump action; there is no consideration of the proximity of the chasing vehicle on the aerodynamic drag of the leader.

Introducing the contact model, we can see the chase vehicle interacting with the lead, with the force and reaction force applied to the bumper frames.

So, what happens if we simulate a little further? Well, as I alluded to earlier, bump drafting is risky; bumping whilst cornering further increases that risk, as misalignment of the two vehicles causes a yaw moment on the lead car. The first bump, with the cars lined up, has the desired effect. The second, as they enter the turn, is more risky; the lead car is unsettled. The third and final bump results in a crash. As we have not updated the driver models in this test, and they are following the centerline of the circuit only, there is no attempt by the leading driver to adjust or “catch” their vehicle when the bumping unsettles it. Conversely, the chase vehicle does not let up with the bumping. In this test, we see the chase vehicle bumps into the lead vehicle during the turn, causing the lead vehicle to begin to spin. As the chasing driver model has no understanding of the other vehicle, there’s no attempt to slowdown, and an accident occurs.

With this rudimentary model, we can see there is a measurable positive impact on the leading vehicle’s velocity through bump drafting. Given the contact model is of a very simple type, it can be improved upon in many ways. Not least of which would be to resolve the world positions of the bumpers into the chassis frames, which for this simple example wasn’t required. 3D contact could also be added by introducing the y and z forces of contact in, along with proper values for the contact stiffness between the two vehicles. The vehicle models also do not feature a representative super speedway setup, therefore the speeds in the plots are not directly representative. More robust handling of the contact could be introduced through multiple contact points between the cars. Improvements of the aerodynamic models, taking into consideration the effect of proximity of either vehicle on the other could also be included. Furthermore, driver model improvements to the chase vehicle driver would be recommended, enabling it to recognise the leading vehicle and modulate speed to control the bumping, hopefully avoiding the scenario shown!