Dymola provides a means to measure where the CPU time is being spent in the model code execution. This feature is known as profiling. Profiling is described in Section 5.7.5 of the Dymola User Manual Volume 1.  This blog article supplies further information.

Profiling is implemented by inserting timers into the dsmodel.c code so that the amount of time spent computing different sections of the code can be recorded. To enable profiling in Dymola set either of these flags from the Dymola Command line:

An example of the profiling information that is returned when a model is simulated is in Figure 1.  These results were generated by simulating the Modelica.Magnetic.FluxTubes.Examples.SaturatedInductor model for 10 seconds using DASSL and with Advanced.GenerateBlockTimers=true.

The 1st column in Figure 1 gives the name of the timing block. For further information about the different types of timing blocks refer to Table 1 found at the end of this blog post.

Columns 3 to 6 contains timing information, from the results in Figure 1 most of the CPU time is spent calculating the simulation.nonlinear[1] system.

How often a section of code is called (i.e. column 7 of Figure 1) is important as improving the performance of the code with the largest number of calls will give a large performance improvement. A basic flow diagram of how a time step calculation is performed is in Figure 2, this diagram helps explain why different code sections are called a different number of times. 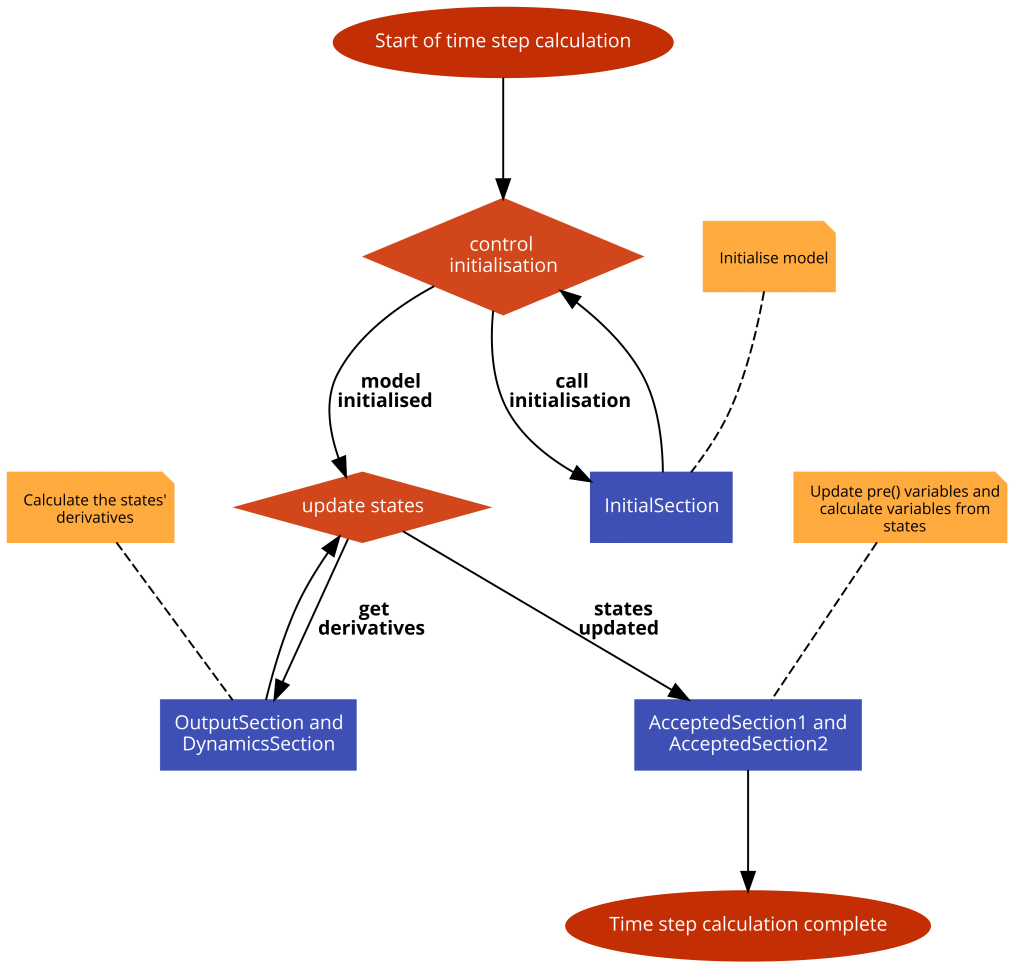 The flow diagram in Figure 2 is of the control of the calls to the model code. The controlling code will call the InitialSection, the OutputSection, the DynamicsSection, the AccpetedSection1 and the AcceptedSection2 code of dsmodel.c.

When the DASSL solver is used the DynamicsSection code is called multiple times until the solution calculated by the solver satisfies the solver’s requirements.

In some cases the controlling code can detect that the states are non-changing for that time step, in this case there will be no call to the OutputSection and the DynamicsSection code and the states will remain unchanged.

The AcceptedSection1 code contains code that does not directly affect the derivatives of the states, however, the past values of this code may affect the derivatives. An example of code that may be found here is the pre() functions used in logic expressions. The AcceptedSection2 code contains equations for calculating model variables that are dependent on the states of the model.

There are many possible locations in a time step calculation where the code may fail, these failures have not been included in the flow diagram in Figure 2 to keep the flow diagram as simple as possible.

Table 1.  Explanation of some of the timer block names