In the Autumn release of the VeSyMA-Engines library, there are some new features included with regards to the air path (intake and exhaust) , the combustion modelling and the mean value engine model.

This blog post introduces the four new features and compares the performance between a full CAREM model, a MVEM air path with CARCM, a full MVEM engine model and a linearized engine model. The mean value engine model has been described in the previous blog post [1].

x-axes quantities are time in seconds unless otherwise stated.

This model consists of a table with calibrated parameters, a MVEM for air path, and a CARCM combustion model. The model can be illustrated by the following figure: 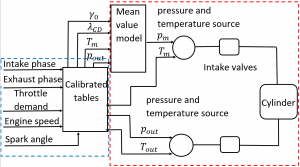 Mean value model outputs pm,  which is plenum pressure. The model can be run on separate cores; model in blue dashed box on one core and in red dashed box on another.

The schematic of a full MVEM engine model is shown below:

In addition to γ0, λCD, Τm and pout, there is another calibrated parameter η0 for BMEP calculation in MVEM. The outputs of MVEM are:

1.3  Linearized model with speed and plenum pressure for control design

The entries for matrix A̅ and B are generated automatically by using a function for each steady state condition. The model can be used for speed control design, AFR control design or other model based controller design.

A function for calibrating full CAREM to a MVEM engine model for different operating steady state condition is given in the figure below: 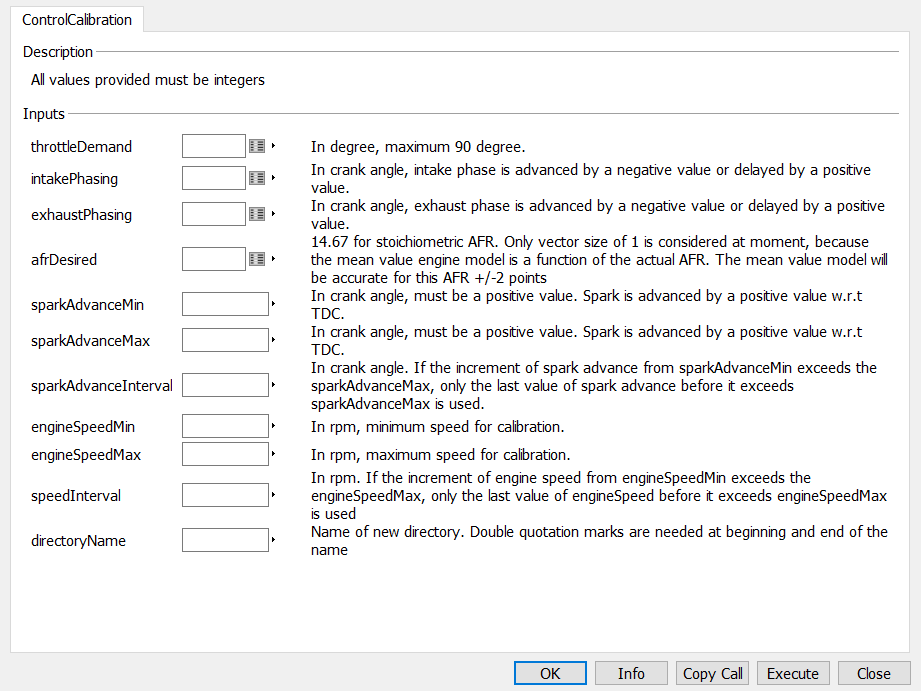 The function automatically puts calibration parameters into look up tables with data records as shown in the figure below: 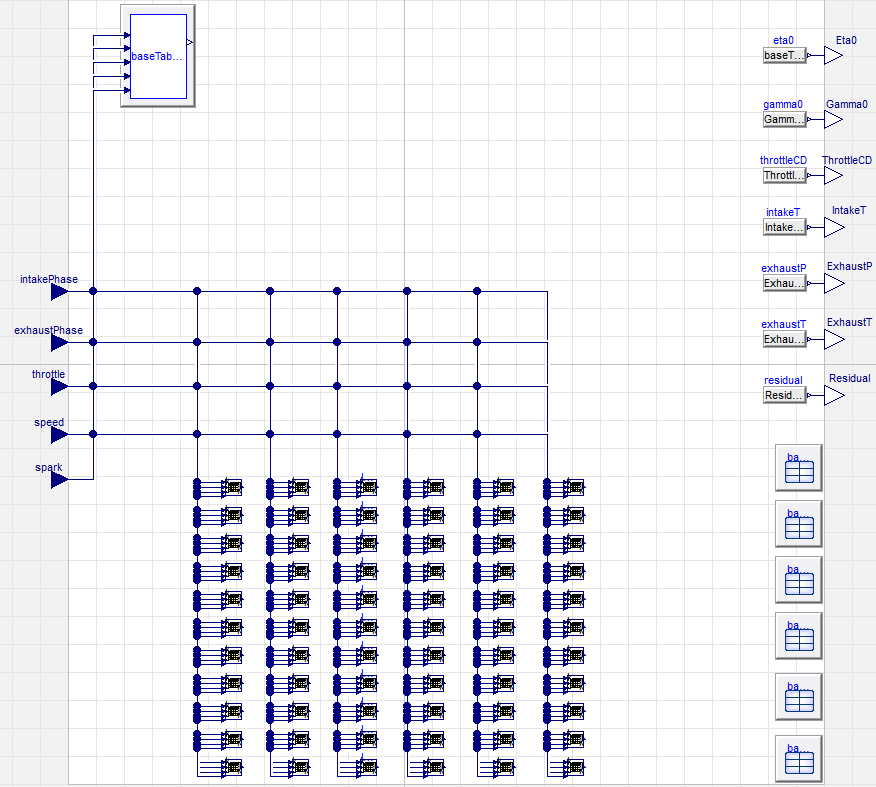 Figure 4: automatically generated by the function in Figure 3 to produce calibration parameters for MVEM

2. Performance comparison between a full CAREM, a MVEM air path with CARCM combustion model, a full MVEM and a linearized engine model

The following figure shows BMEP from a full CAREM, a MVEM air path with CARCM and a full MVEM, at throttle opening angle of 9 degrees, 25 CA spark advance, zero phase shift for intake and exhaust valves, stoichiometric AFR and varying dynamometer speed between 1000 rpm to 2000 rpm. 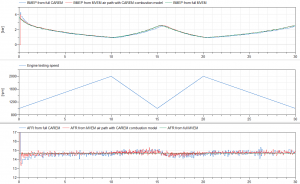 It is shown in Figure 5 that the BMEP produced between full CAREM, MVEM air path with CAREM combustion model and full MVEM, during the speed transients are very close.

An inertia dynamometer test was used to generate results for a full CAREM, a MVEM air path with CAREM combustion model and a full MVEM: 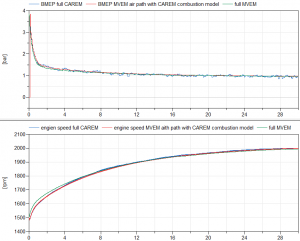 It is seen the BMEP and engine speed produced by the three engine models are similar.

The linearized model is computed automatically for each steady state condition. Figure 7 shows a dynamometer speed test at 1200 rpm, with 9 degrees throttle opening, zero shift for intake and exhaust valve, stochiometric AFR and 25 CA spark advance. It is shown that the linearized model in (3) produces the same engine speed and plenum pressure compared to the full CAREM engine model at the given steady state operation point. Values of entries for the linear matrix in (3) are k1=404732, k2=0.0142, k30.0027, k4=97.03 and ω0=125.6 rad/s, u0=0.15707 rad, i.e. 9 degrees. 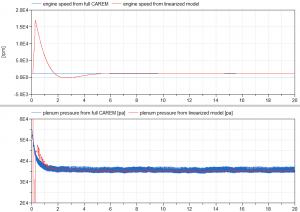 Figure 7: Engine speed and plenum pressure from a full CAREM and a linearized engine model.

It can be useful to have a full CAREM, a MVEM air path with CAREM combustion model, a full MVEM converted automatically from a given CAREM engine model and an automatically generated linearized engine model. The four types of models all have their own merit. The benefits and drawbacks of each can be summarized below:

1.       Full CAREM engine model: computes 1D fluid dynamics for intake and exhaust manifold, fully physical. The drawback is that the model is highly interconnected and if split into several FMUs or cores, each part would require several feedback signals for calculating fluid dynamics between the air path (intake and exhaust manifold on one core) and the combustion (run on another core). In applications where the intake and exhaust manifold are desired to be separate from combustion model, so that they can be run on different cores in HiL rig, these highly interconnected feedback loops slow the model down considerably and minimal time delays cause the models to become inaccurate and real time performance can’t be achieved. The cause of this inaccuracy, slow-down or even instability of the model  can be due to the sampling delay existing between the different cores. Higher sampling rates will improve the accuracy but will slow down the simulation speed, whereas a lower sampling rate will lose accuracy but the model could run faster.

2.       MVEM air path with CAREM combustion model: calibrated MVEM air path calculates the plenum pressure and mass aspirated flow rate into cylinder. The MVEM intake model is coupled with CAREM combustion model. The model is not fully physical as intake model quantities are partially calibrated rather than physically calculated. The advantage of the model is however that no feedback loop exists between intake, exhaust and combustion, therefore the models can be run on different cores in HiL to achieve real time performance, with cylinder pressure, temperature and other thermodynamic quantities produced in high accuracy.