The intention of this article is to provide additional comment and examples, relating to the article about the eigenvalue function, and above all the meaning of its results. Having provided simple instructions on the function, this article is aimed at undergraduates and those interested in revising the subject with Dymola as a tool for study.

We will take the example of the humble inverted pendulum. The key physical observations are that moving further from the equilibrium will cause still further departure, but that faster motion, generates a restoring force. This is reflected in the results, and the discussion of “eigenvalues” and “eigenvectors” connects directly to it. The other key thing to bear in mind, however, is that the linear model is only useful with theta near zero. We investigate the necessary linearisation later on, and illustrate how Dymola can just as easily plot progressively more accurate versions of such a simple system by using more Taylor terms than only the first (linear) term we are used to from high school physics i.e.

due to the (exact) infinite series expansion for Sine. 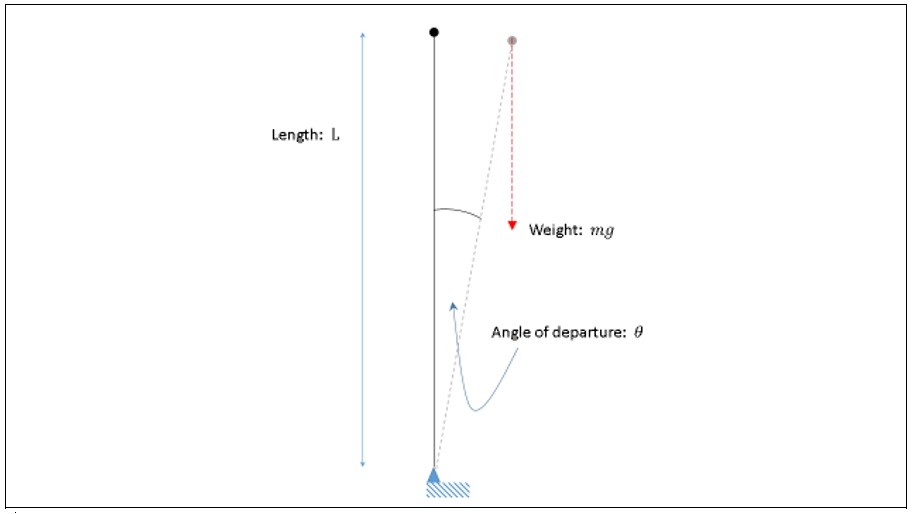 An inverted pendulum has equation of motion:

In the equation of motion:

For a point mass:

And the system may be linearised (Taylor expansion of

One can reduce the order of this system, converting it into a system of two first order equations, let:

The system demonstrated assumes easy numbers that are easy to picture:

Use of eigenValue Function to Analyse the System

Applying the Dymola eigenvalue function to matrix A for a damped, inverted pendulum produced the trajectories shown in Figure 2.

Note the way the trajectories converge on the eigenvector with negative real eigenvalue towards t=-∞, and on the positive-eigenvalue eigenvector towards t=+∞. The eigendirections are labelled with dotted lines, with the arrows indicating the direction of advancing time. 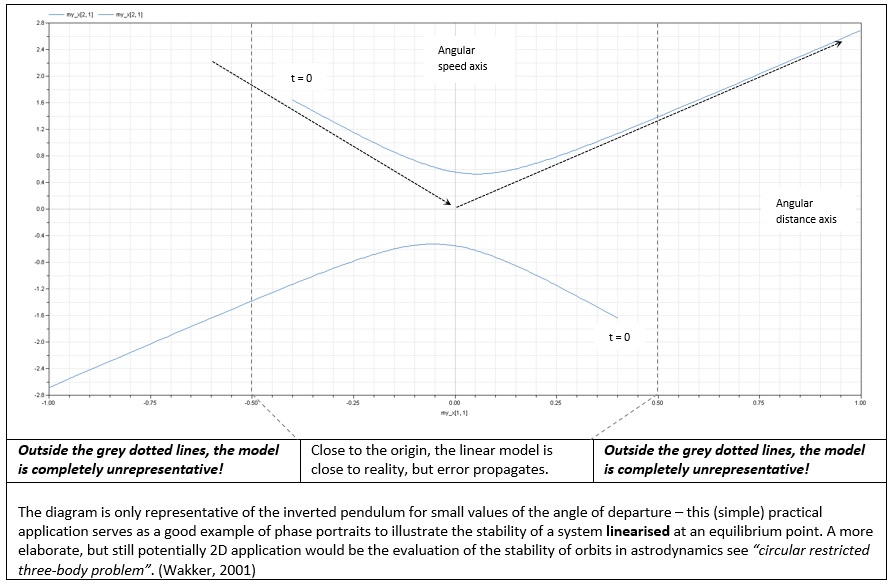 The axes are angular distance (that is, angle through which the pendulum has moved from the vertical) and angular speed, (that is, how fast the pendulum is rotating/falling). It is therefore a hodograph.

The two trajectories represent the same initial conditions, but with reversed signs. In other words, the trajectory below begins on the right, and behaves as the antisymmetric mirror image of the one above, heading first toward the origin (losing speed, and reducing angle from the vertical) then away again.

A trajectory starting at the origin would, if programmed in Dymola, result in no trajectory at all, however this phase-space analysis shows that any tiny deflection from the origin will cause the system to diverge along the arrow heading away from the origin (toward the top right, or bottom left, depending on the direction of any initial perturbation). The eigenvalue function shows this easily.

The trajectories extend from an initial displacement of (+, – respectively) 0.35rad and (- or +) 1rad. The extremes representing zones where the linearised model isn’t valid for the familiar, but simplified example chosen.

Nearer the origin, the behaviour in Figure 2 closely represents that of an inverted pendulum.

Up until now, we have used the approximation that

is approximated by the first term of it’s series expansion,

. This is very neat, as it makes the system linear, and is a good approximation for small values of the angle.

Using Dymola, we can go from a linear system that we easily understand, and can check, to progressively more accurate, or detailed models. Though this is quite a trivial example, engineering applications really benefit from being able to easily “drop in” more accurate models as they become available, without needing to rework other parts of the system to make them compatible. Though this example is too simple to see a “quantum leap” in ease of modelling because of this, it’s interesting to add a different approximation for

i.e. using one Taylor term only. One can progressively add additional terms to improve the approximation, and we can use Dymola to compare the appearance of the trajectories.

Figure 3. Phase portrait is the same example using a two-term expansion for Sine

The diagram below shows the trajectories differing only slightly. The lower part of Figure 3 illustrates the phase portrait with the same initial conditions, but adding the non-linearity introduced by the two-term expansion for Sine. The uppermost diagrams are plots measuring the deviation of the one from the other (the two term version, minus the one term version) normalised to the RMS average of the two quantities.2 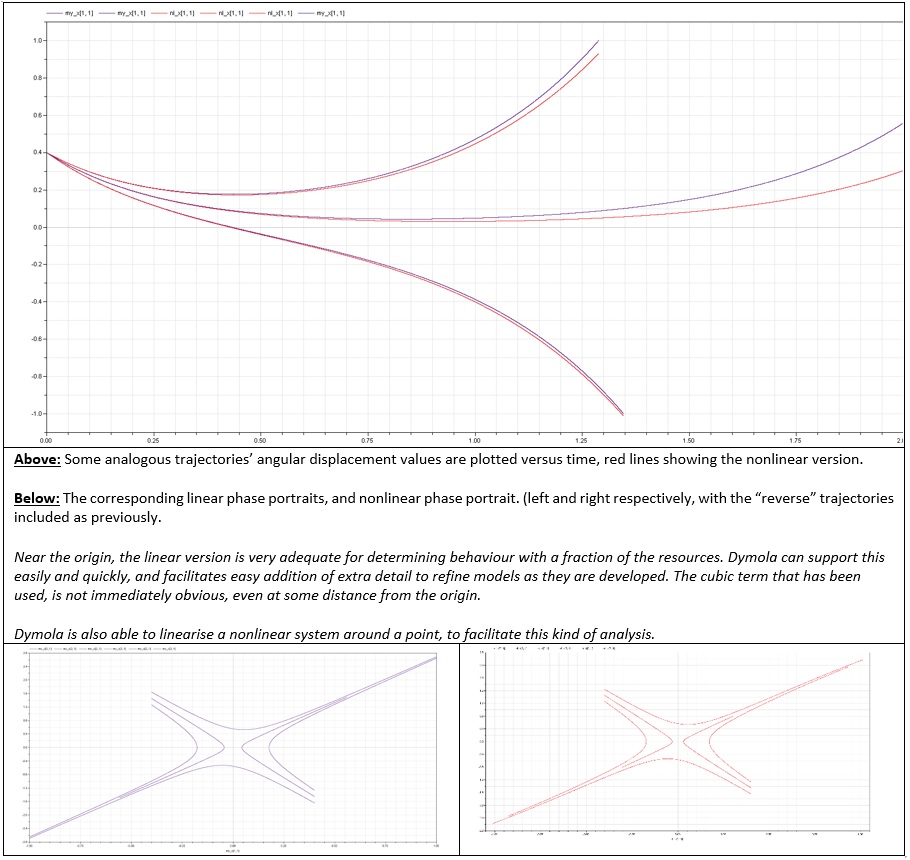 Figure 4. Several trajectories (i.e. the same system with different initial conditions) with the one-term, and two-term displacement (i.e. angle of departure from vertical) values plotted against time. The “non-linear” two term values, so called because they have a non-linear term, are plotted in red. 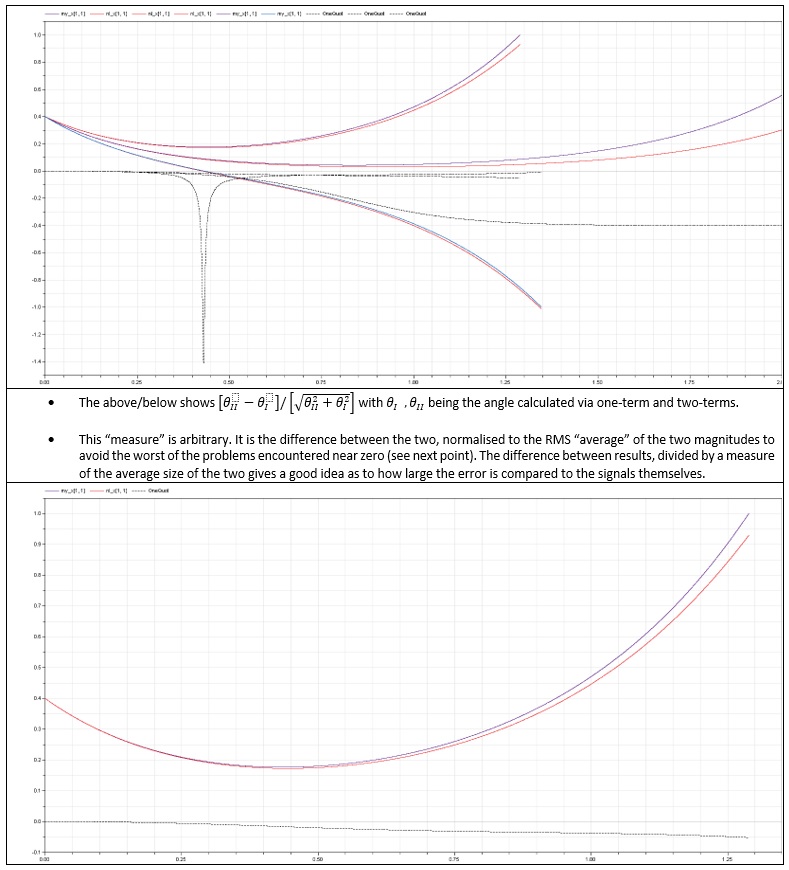 Figure 5. Above, three other trajectories with a normalised error measure included for each (all black dotted). Below a single trajectory and error signal isolated for ease of viewing.

This section is included to try to connect the mathematical concept to the world of experience. This is easier with some examples than others, but I have gathered a few insights that are helpful to me to assist in making it less abstract.

The diagram below illustrates the “scaling” relationship between the vector before left multiplication by the matrix, and after. When the eigenvalues are real, it’s easy to see that a vector grows only in length if it is an eigenvector of the multiplying matrix. With complex eigenvalues, rotation occurs purely because the multiplying factor is a complex number. Nonetheless an eigenvector before and after left multiplication will still be scaled by the corresponding eigenvalue – scaling by a complex number is merely a more complicated concept. 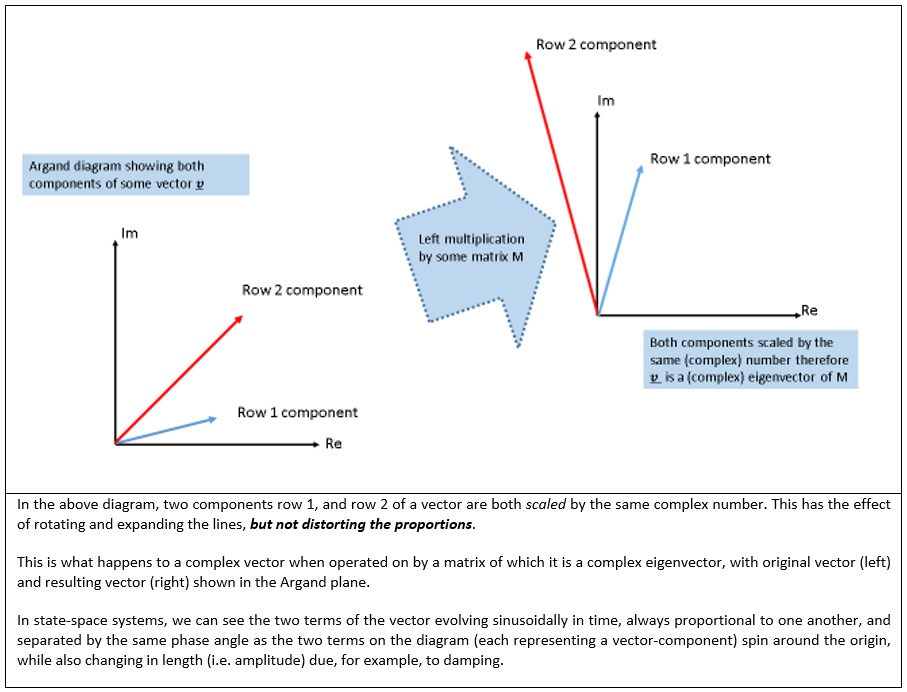 Figure 7. The case of a singular matrix

If there aren’t sufficient eigenvectors, then the matrix can’t be diagonalised (i.e. it is singular). If this is the case its determinant will be zero. (Lay, 1997)

If matrix A were singular, it would mean that either:

The response of dynamic models, systems with purely real eigenvectors are much more easily modelled (Adhikari & Srikantha, 2008) than those where this is not the case (Inman & Lallement, 1995). This influences the choice of damping model, and has precipitated research to discover acceptable forms for models.

This is connected to the fact that in vibration analysis, every natural frequency of a discrete dynamical system is associated with a “characteristic motion” or “mode shape” (Inman, 2001). Those mode-shapes are given by the eigenvectors of the linear (or linearised! 3) system, posed in homogeneous form.

Rotation matrices also provide eigenvectors physical meaning. In this case, the single real eigenvector is along the axis of rotation generated. The other two (if 3D) will be a complex conjugate pair that fix the angle of rotation.

[1] Further approximated as a unidirectional vector field not a central force.

[2] This normalisation is there to avoid dividing by zero so that the graph turns out more informative. The reader will notice there is still a spike where the two quantities get close to zero, because their RMS average also gets pretty small. Though not sophisticated, tricks like this are important to avoid discontinuities or “events” in explicit simulations.

[3] Dymola has a facility to linearise a system around a given operating point, amongst other things to facilitate linear control-theory based examination of the response, like root-locus analysis.