Library version management is an important topic for Dymola developers. On occasions we experience warnings when opening a model sent by a colleague/customer when an alternative version of a required library is automatically opened. Scripting in Dymola is a handy way to do many things. This post outlines how it can be used to eliminate those library version mismatch errors when utilising third party libraries. This post covers a similar topic as one written previously about creating a function to open libraries.

Often, Dymola developers utilise libraries produced by third parties (such as Claytex) or even other groups within their company. It isn’t uncommon for multiple versions of each library to exist on the developer’s computer. Getting Dymola to automatically load the desired version is therefore a desired outcome. If an undesired library version is automatically loaded you can simply right click on the library in question and ‘unload’ it: 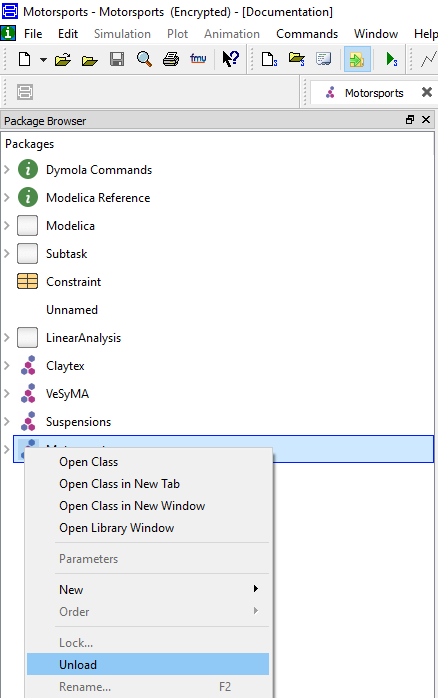 …then in the File menu, ‘Load’ the version to be used… but for those of us using Dymola on a day to day basis it would be nice to avoid these few extra clicks.

I now use a file opening script to guarantee the required library versions are opened. This script opens up the specific libraries / versions that are needed for the task at hand. Below is an example script that I use to prepare my Dymola environment by loading the libraries that I use on a day to day basis:

If I’m testing a particular installation of the Claytex libraries, I will use a different script. The one below opens up libraries from the Claytex installer location rather than the source code directory setup shown above. Both end by specifying the working directory we wish to use.

In closing, using a script to prepare your Dymola environment can make the Dymola developer’s life a little easier. Many commands can be added to these scripts. Consider using the script editor in Dymola and typing Ctrl+ Space to see some more commands that may be of use to you. If you are interested in a list of more advanced options, type this in the command prompt: