PID controllers have been widely used for control design due to their simplicities and non-model based design. However, they lack robustness with respect to uncertainties and external disturbances. This blog post describes a method for developing a mean value model of intake manifold pressure and engine speed for model based idle controller design which can be applied to mean value and crank angle resolved engine models. This post shows the results of a mean value nonlinear model and compares these with the result of crank angle resolved engine model. A linearised model is then derived for controller design. Validation results show the derived nonlinear and linear model can accurately catch the dynamics of Dymola crank angle resolved engine model at the operating point at which linear model is derived.

Mass flow through throttle can be approximated as

is the open area,

is the pressure upstream,

is the ideal gas constant,

is the temperature upstream,

is the pressure downstream and

is the air mass flow through the throttle.

Manifold pressure can be modelled as

is the manifold temperature,

is the volume of intake manifold, and

is the mass flow into cylinder.

Mass flow into the cylinder can be modelled as

is the volumetric efficiency of intake ports and valves, i.e.

is air density in intake manifold,

is the engine displacement volume,

is the engine speed,

is approximately 14.67 for typical RON 95 gasoline. Approximation of the volumetric efficiency of intake ports and valves

is the exhaust manifold pressure and

Engine brake torque can be modelled as 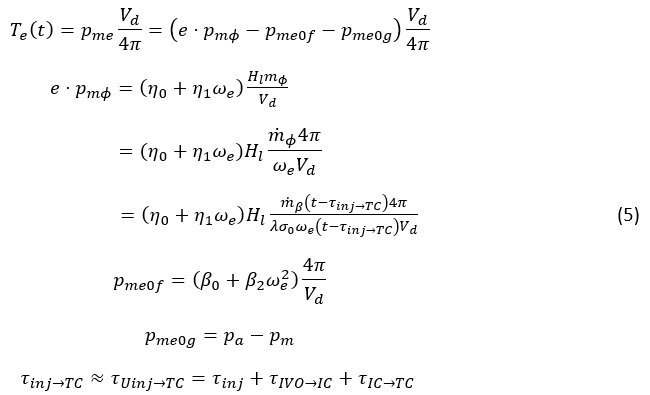 is the brake mean effective pressure,

are energy losses related to friction and gas exchange,

represents the thermodynamic properties of the engine (related to indicated or inner mean pressure),

heating energy of the fuel,

are tuning parameters and

is transport delay approximated by

Engine speed with a constant inertia

is load torque and can be expressed as

To simplify the notation, the following abbreviations are introduced

Using these definitions, the combined nonlinear system can be written compactly as

Linearising the equation (11) at equilibrium

When delay is zero or is neglected then (13) becomes

The following section will show validation of the nonlinear model (11) and linearised model (13) in simulation.

For idle speed control we are interested in the engine speed around 700 to 800 rpm, in this case nonlinear model (11) is linearised around this operating point at 710 rpm. Tuning parameters are chosen as 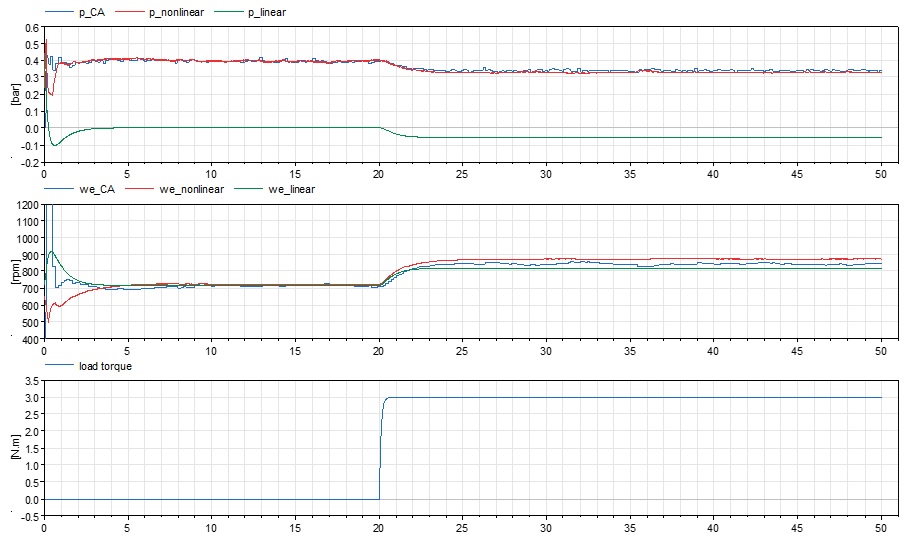