Download a copy of the article as a PDF: Component Orientated Modelling Dymola

In this 2nd article in the series “Getting more from simulation” we explore how the component orientated, physical modelling approach used in Dymola simplifies model creation and accelerates the model development process.

What a component orientated modelling approach means in practice is that each object in the model diagram represents a real physical part in the system (e.g. a pipe, resistor or gearbox).  The Dymola modelling environment frees the engineer to focus on what’s important (i.e. designing and developing the overall system and specifying the individual components) rather than being forced into wasting time developing and debugging an abstract block diagram representing one interpretation of the system.  With Dymola there is no requirement for the user to waste time manually rearranging equations, it’s all handled within the next-generation symbolic manipulation engine which comes as standard.

Model creation in Dymola is performed using a drag-and-drop approach.  Component models from all engineering domains are available in libraries (shown on the left hand side in the screenshot below) and by simply dragging and dropping the required components in to the model diagram the schematic of the system can be created.

The system consists of an electric motor connected to a 1D rotational inertia and a load inertia via a gearbox.  The voltage supplied to the motor is determined using a PID controller that aims to match the rotational speed of the load inertia to the set-point defined in the step function. 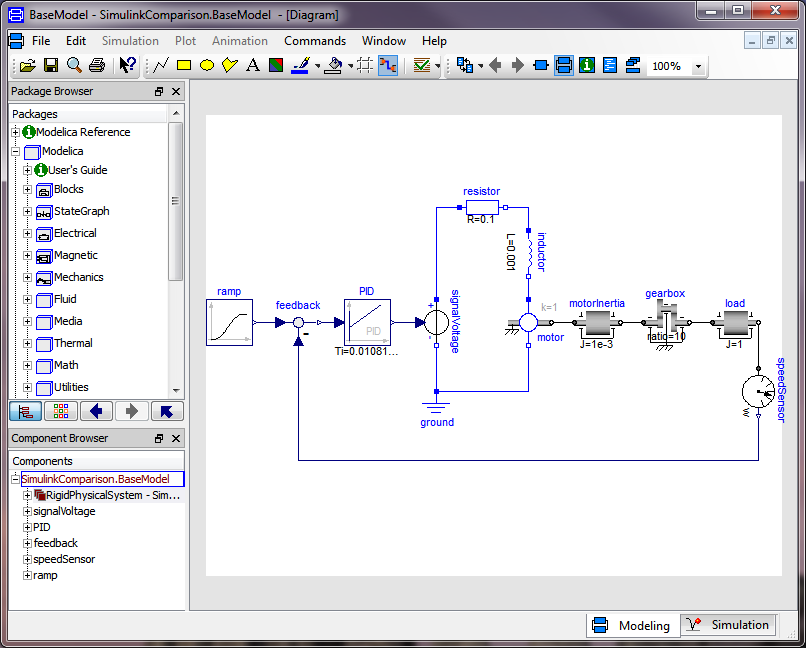 To set the component parameters, simply double click on the part and a dialog box showing the parameters appears.

The most important feature of Modelica for this discussion is to notice how the model equations are actually written.  The final equation implements Newtons 2nd Law in an instantly recognisable form, i.e. the sum of the torques acting on the object is equal to its inertia times acceleration.  Modelica supports equations of the form expression = expression rather than the traditional programming approach that only supports equations of the form variable = expression.

To transform the system model from Modelica code in to efficient simulation code, Dymola uses symbolic manipulation.  Symbolic manipulation applies computer algebra techniques to automatically rearrange the model equations in to the required solution.  The animation below explains the basic steps of this process: