Getting more from simulation – Part 1

It’s time simulation engineers started using the right tool for the job. One of the problems of using traditional simulation tools has been knowing how to interpret what happens in reality and translate that into the abstract representations needed for use in simulation tools.

Through this series of articles we will explore the Dymola approach to modelling and simulation to illustrate the key differences and advantages that can be realised by approaching the modelling tasks from a new perspective.  This article will provide an overview of the modelling approach used by Dymola and subsequent articles will contrast this with a traditional block diagram or programming approach and explore the benefits this new approach offers.

Models in traditional simulation tools, such as Simulink, or that are written by hand in C-code or Fortran,  typically represent one interpretation of a real system and can only be used to simulate one condition so when an engineer needs to evaluate another condition a totally new simulation model is required.   For example, if a vehicle model has been developed to calculate the engine speed and load operating points over a drive cycle then, typically, it could not be used to predict how the vehicle will respond to a driver input.  A new model would have to be created for this task.

The result for the engineer of using these cumbersome methods is more work in a) building all the different models, and b) in keeping them all up to date. The result for the business are bespoke models produced to the individual engineer’s interpretation of the system, that are often difficult for others to interpret and limited in usefulness and accuracy by the engineers time, skill and capability.

Of most significance to both the individual engineer and the business is that sharing and maintaining models between individuals, inside and outside of the immediate team (including different functional teams or with customers and suppliers) is cumbersome at best, impossible at worst.

The Dymola approach is different.  Dymola, a Dassualt Systemes software product, supports a component orientated, physical modelling approach.  What this means in practice is that each object in the model diagram represents a real physical part in the system (e.g. a pipe, resistor or shaft, etc.) and that component and system models can be reused to carry out many different types of analysis as we will explore in the next articles. 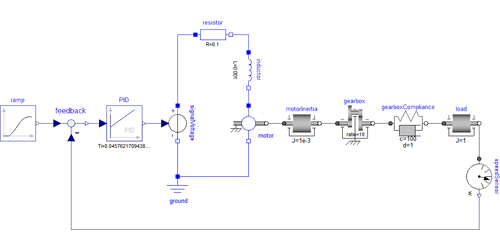 The Dymola modelling environment frees the engineer to focus on what’s important (i.e. designing and developing the overall system and specifying the individual components) rather than being forced into wasting time developing and debugging an abstract block diagram representing one interpretation of the system.  With Dymola there is no requirement for the user to employ vast amounts of resource and time manually rearranging equations, it’s all handled within the next-generation symbolic manipulation engine which comes as standard.

In the next article in this series we will look at how the component orientated modelling approach simplifies the model creation process and how symbolic manipulation transforms this in to efficient simulation code, this can be found here.