This article will explain some ways in which text files can be read into Dymola models. The article is intended for those seeking that specific information (go directly to summary of functions) and any student, or professional as yet new to Modelica, Dymola, and/or CAE software in general, interested in reading text files while running Dymola models.

Why Read In Files

There are a number of motivations for wanting to read text files.

Often, engineering software has a convenient facility to read a selection of file types. It is also routine as many readers will well know, to use “translator” modules which read (for instance) one CAD format into an alternate CAD software, or structural analysis system.

Often, it’s useful to be able to read a file that was written using general purpose software, or which you just typed out yourself, if need be. Such files are often text files. There is certainly not always facility to read these, because CAE software is usually more concerned with results.

There are many great advantages to text files. One also notes that the simulation logs, and input scripts for FEA software are also often simply text files. Better still these are often written automatically in a fixed format with various headers and sections which can be “found” by your models & functions, using some logical, albeit cumbersome string manipulation. It can be invaluable to be able to check data against these kinds of files.

The purpose of this article is to illustrate the uses of, and syntax for a handful of key functions included in the Modelica Standard Library:

This function uses external code to count the lines in a file. It is useful because it provides an avenue by which to size an array to hold the content of the file in a way which suits the user.

Below an example is shown of an array being sized by a call to this function. Note that this will only work in the context of another function, rather than within a model.

This function reads the characters stored in a text file into a String array. Every line becomes an entry in the array. You need to define an array ahead of time as usual. It can be seen here that the array is set up with unknown dimensionality. Assigning it the value of the function output determines the dimension. However, one cannot do this within a model. 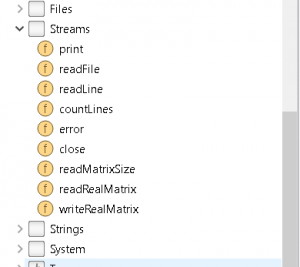 Below a function is printed which goes to a location on the machine & reads a text file. The result of this is a vector of strings, each entry of which is one of the lines of the file.

The reader file listed above is written with several arguments. Note especially the integer signifying which line of the file to output.

These functions are very useful. While we’re used to writing out numbers as strings, for example, into a text file (see article) these let us “read” some text not only in the sense of reading & registering the characters but in the sense of “understanding” that they signify a numerical value.

Below the model is provided with which the function already shown can be called. Within this model there are several items which could just as easily have been included in the function. We have a reminder here that the equation section will be calculated at every time-step, and therefore any command to read scan a string and/or write it down in a text file will yield a result at each step. This could well be what is intended, and indeed, a main reason to put the scanReal() part in your model, not in the function, but here we’ve restricted it to the last time-step to more easily see what comes out, using when terminal() then.

If the above model & function are run, we can get information in text form to be read & understood by Dymola file reading functions. Try using a file of your own, and filling it with some data, such as several rows of numbers, and reading it in. Experiment with using Dymola to pick them up from the text and for example, add them together, having used scanReal to have the machine actually interpret the data.

Ensure the command path and file names correspond to the ones you’re using.

We have seen how the reading of text files in Dymola can help in the checking of the workings of models or functions. We have also seen some examples of how to handle the strings that result, and functions which convert the strings of characters into meaningful values.

Several functions exist that inspect the metadata of text files, extract the content, and process the information carried therein, to convert it back into numbers from a string of characters. Using these you can read data, and obtain information.

If you’re a student interested in using the Dymola software for your college coursework, or if you want to learn more about programming parametric engineering models in Modelica, then contact Claytex support (support@claytex.com).