Comparing the optimisation of gear ratios for different drive cycles

When considering fuel consumption tests, comparatively little information is required to generate a reasonable understanding of the effects of changes to a vehicle’s design. In Europe, the fuel consumption of a vehicle is evaluated using the New European Drive Cycle (NEDC), with the United States the equivalent termed the EPA Federal Test Procedure (FTP-75). They both have the same test procedure comprising a predefined speed and gear profile (for manual vehicles) over a set period of time for a vehicle to follow. Therefore, the investigation can be reduced to a longitudinal test without the need for high fidelity suspension, tyre or brake models as there are no high acceleration or braking events. The longitudinal acceleration is small enough to neglect the issue of loss of traction, thus the pitch and heave of a vehicle can be eliminated. This reduces the fuel consumption test to a test where the chassis only has longitudinal degree of freedom.

This leaves a simple body model with just the mass and general aerodynamic properties and the powertrain to simulate. The physical modelling of the powertrain can be reduced to 1D rotational components and torque production can be controlled by a lookup table. A brake specific fuel consumption (BSFC) table can be used to calculate the amount of fuel used; this table can be generated from test data to mimic the performance of a real engine.

The Automotive library provides all features and enables expansion and development/replacement when designs are chosen and high-fidelity models are created. The vehicle models within the Automotive library fulfil all the criteria outlined above and allow modification to all respective parameters mentioned above. There are also some standard drive cycle experiments including the NEDC and FTP-75 drive cycle data and driver models to follow both the speed and gear demand. 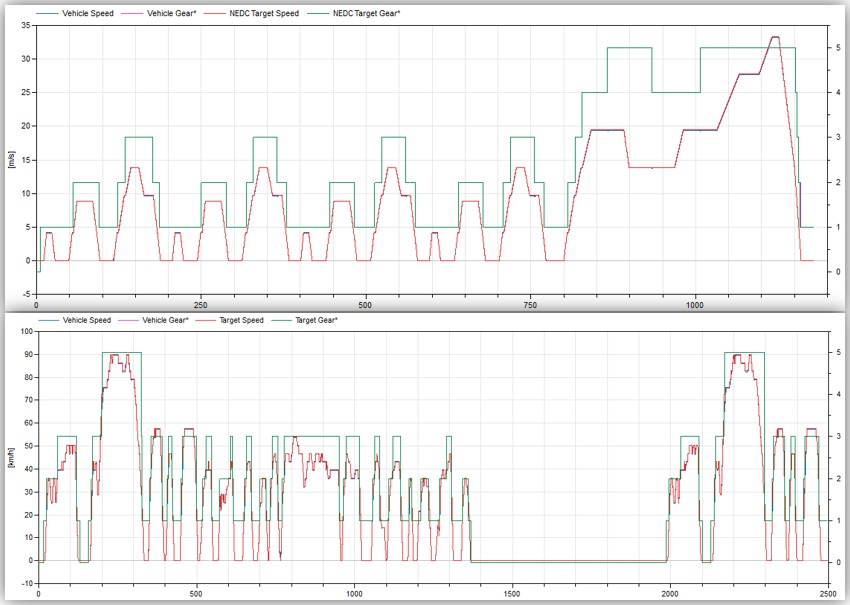 Figure 1: Vehicle speed and gear compared against the NEDC and FTP-75 targets

The tests will be conducted initially using the manual vehicle; first the speed and gear of the vehicle are checked against both test speed targets to ensure that vehicle speed matches. Figure 1 shows both targets with the vehicle variables overlaid and both the speed and gear results are accurate enough to proceed.

These tests will be starting with the default gear ratios but removing 6th as both drive cycles only require 5 gears; first we modify them to optimise for the NEDC cycle. Initially, the gear ratios are 4.68, 2.53, 1.687, 1.215 and 1. As optimising the vehicle for fuel consumption could have a detrimental effect on the acceleration and top speed, we will log the key longitudinal performance figures using the standard gear ratios and compare them to the final figures. The 0 to 100 km/h (62 mph) time for the standard manual vehicle with 5 gears was 13.8 seconds and a top speed of 193 km/h (120 mph).

The Optimizer library was used to optimise the gear ratios with the target being to minimise the mFuelBurned variable in the fuel tank, which is the mass of the fuel that is burned. To ensure that the results were valid the absolute value of the speed error was taken and then integrated. This is similar to the error between the desired and actual distance travelled but, due to using the absolute value, it gains the cumulation of the distance error over the whole test. This value was used to set a limit to the total amount of deviation from intended distance. The limit for this test was a total of 60m error over the 1180 second test; the initial value of this in the NEDC test shown in Figure 1 being 58m.

The results were that the default gearing seemed to be tuned well for the NEDC Cycle with only a 0.3% fuel saving over the test, reducing the fuel usage from 0.729kg to 0.727kg. The result of these gear ratio changes had very little effect on the performance as well, with the 1-100km/h time reduced by 0.1 seconds and the top speed increased by 1km/h.

The same procedure was used for the FTP-75 test, but this time the initial distance error was 135m as it was a longer test and the fuel usage was 1.306kg. The limit for the total error was increased to 145m.

The results of the FTP tests were that there was an improvement of 0.7% fuel usage and the acceleration and top speed were unchanged as with the NEDC tests. Table 1 shows the results and the percentage differences between the initial gear ratios and the optimised ratios with the ratios optimised for the FTP-75 drive cycle requiring the greatest change.

The result from this shows that the initial gear ratios were very close to being the most efficient for the NEDC cycle and reasonably close to optimum FTP-75 ratios. But the interesting result was that there was very little change in the performance, with only around a 1% change occurring with both the fuel usage and performance figures.