How to Automate Modelica Models Experimentation in Dymola

Abstract – This article aims to describe a methodology for automating the experimentation of Modelica models in Dymola. For this purpose, a simple RC circuit model is adopted from a previous blog article. With the aid of a specialised Modelica function class and built-in Dymola functions, the chosen model is modified to perform an automated parametric sweep study and to plot the simulation results.

Download a copy of this article as a pdf: How to Automate Modelica Models Experimentation in Dymola

Dymola (Dynamic Modelling Laboratory) [1] is an advanced systems-engineering tool. It is not only useful for modelling multi-engineering & complex physical systems but also includes powerful postprocessing (experimentation, plotting and animation [2]) features for analysing the simulation results in a convenient and user-friendly manner. Dymola is based on the open source Modelica (equation-based object-oriented) modelling language. In addition to the Modelica Function (a specialised Modelica class) available in the Modelica Language (see specification guide [3]), Dymola also provides several built-in functions. These built-in functions are classified into the following function groups: Help, Simulator API, System, Plot, Trajectories, Animation, Matrix IO, Documentation and others [4]. This article utilises some of these built-in functions together with a Modelica Function to describe a methodology to automate the experimentation of Modelica models in Dymola.

A parametric sweep study usually involves a model to simulate several times with a selected set of parameters by which to analyse the sensitivity of the model in relation to its parameter values. A simple parametric sweep study is given in the previous blog post of ‘How to simulate a model multiple times with different parameter values’ on the Claytex TECH BLOG [5]. This blog post [5] showed two distinct methods; the first one is using the ‘simulateExtendedModel’ and the second one is using the ‘translateModel’ built-in functions available in ‘DymolaCommands’ package. On the one hand, the blog article [5] used the Dymola Script editor to run a simple test model multiple times and to store the simulation results of each iteration separately, but on the other hand, the article [5] did not show how to plot the simulated results. Therefore, the present article will not only fill this gap but also use the Modelica function instead of the scripting facilities of Dymola for demonstrating a model experimentation method in Dymola.

The methodology provided in this article is given in two parts: 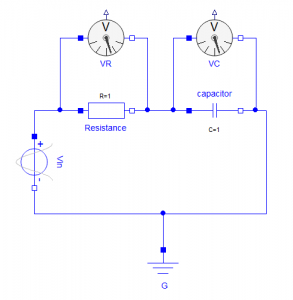 Figure 1- The RC network is depicted as an acausal equation-based model in Dymola [7].

In [7], a state-space model of a simple RC circuit is presented, and a methodology is shown to develop this model from scratch. Using this model, an experimental study was also conducted in Dymola which investigated the use of this simple RC circuit model for frequency filtering applications. However, in [7] both the model experiments and the plotting of the simulated results were done manually. In the present article, the author adopts and modifies this model to integrate it with a Modelica function shown in the next section. A screenshot of this modified Modelica model code is provided in the appendix. Compared to [7] this code has two Added Sections; one below the extends command and other below the equation section. Modelica models

This section describes how to build a Modelica function called “ModelExperiment”. ModelExperiment is developed to automate the experimentation of the model mentioned above, within Dymola. A set of procedures are coded in the created ModelExperiment function and has four main stages. Each of these stages also has sub-tasks. Modelica models 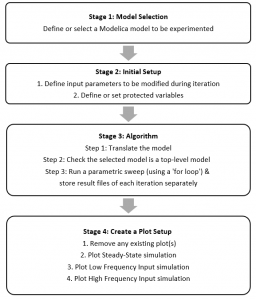 Dialog box of the ModalExperiment function

In Figure 2, the automation process begins with Stage 1: defining or selecting an existing Modelica model within Dymola. In our case, this model is the modified RC circuit mentioned in the previous section. This step is also shown in the first input field modelName of the ModelExperiment function dialog in Figure 3.

Stage 2 in Figure 2 describes the Initial Setup. It has two sub-tasks which are as follows;

Please note that sub-task 2 of Stage 2 and the rest of the stages in Figure 2 can only be accessed within the ModelExperiment function. Modelica models

There are three sub-tasks within Figure 2, Stage 3:

Figure 2 Stage 4 is dedicated to the Plot Setup. This stage also has four sub-tasks. These sub-tasks are as follows,

Please note that Sub-tasks 2 to 4 of Stage 4 in Figure 2 are done by using a Dymola built-in function, createPlot.

For the sake of demonstration purposes, the operations coded in the ModelExperiment function are made very simple. It means that, in ModelExperiment, a user can only select a Simulation time for all the experiments at a time. In this article, there are three experiments: Steady-State, Low and High-Frequency Input simulations are considered with an equal Simulation time of 30 s. However, in [7], the High-Frequency Simulation Input study was carried out for 10 s only. Modelica models

The plot windows generated after the execution of the ModelExperiment function are shown in Figures 4, 5 and 6. For illustrating the discrepancy mentioned in the last paragraph, Figure 5 from [7] is also shown in Figure 7. Modelica models

The voltage response of RC circuit at a very low excitation frequency of 0.2 rad/s or 0.03183 Hz.

Both Figure 4 and 5 match with Figure 3 and 4 in [7] for a simulation time of 30 s. Please note that physics of this model and the plots shown from Figure 4 to 6 are beyond the scope of this article. Those who are interested in getting more insight into the physics of the model can refer to [7].

The voltage response of RC circuit at a high excitation frequency of 10 rad/s or 1.59 Hz simulated for 30s.

Figure 6- The voltage response of RC circuit at a high excitation frequency of 10 rad/s or 1.59 Hz simulated for 30s.

The High-frequency input simulation copied from [7].

In summary, the presented method in this article also proves that Dymola has at least two choices, either using Dymola Scripting or Modelica Function, to perform an automated Modelica model experimentation in a user-friendly manner. Modelica models

This short article presented a methodology to automate Modelica model experimentation in Dymola. A simple and modular model adopted from the previous blog article helped to demonstrate the automation process. The presented method shows that a user can not only perform an automated parametric sweep study but is also able to plot the simulation results of interest in a more user-friendly way. For more information about how to create a Modelica function to carry out the proposed automation process, please contact Claytex Services Limited.

The Modelica model and code used in this article (compatible with Dymola 2021x and Modelica Standard Library 4.0 can be downloaded here. 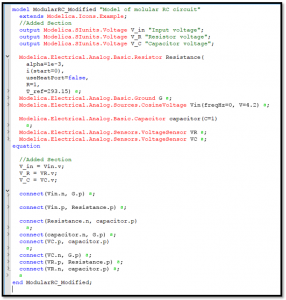